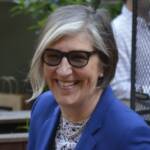 Publications include: Mary Wollstonecraft and Newington Green: An Anthology edited by Emma Clery discussing Wollstonecraft’s impact on Parliament; ‘Embodied and En-sited Performance: Reflections on Gender in Cooking Miss Julie / Miss Julie Cooks and March of Women,’ with Professor Kathleen Irwin in Analysing Gender in Performance (eds) Halferty, P and Leeney, C Palgrave. She was made a Professor of Performance at the Royal Conservatoire of Scotland and a fellow of the Royal Society of Arts (2015).